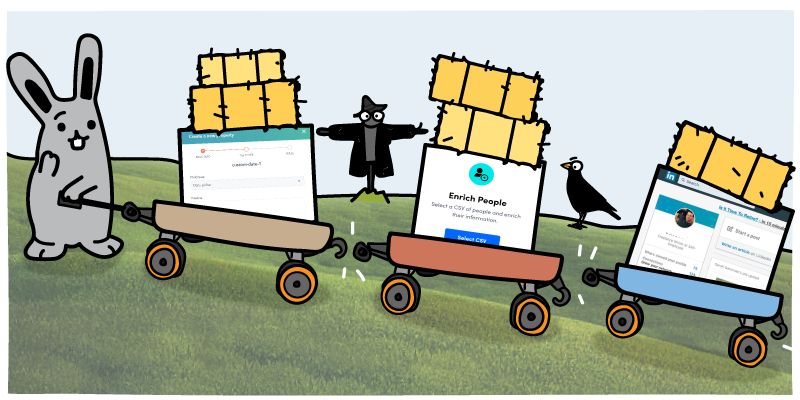 This post is part of a series that explores the problems our customers have fixed using Insycle. Each post outlines the challenge and shows the solution step by step.

The Problem: Contacts Aren’t Associated with the Right Companies After They Change Jobs

An Insycle customer in the IT services industry was struggling to build and maintain long-term relationships with clients. The main problem was that contacts in this customer’s database were still associated with their old companies after they had switched jobs.

The Inycle customer, whom we will call Williams Company, used Apollo, a data provider, to enrich existing records in HubSpot. Apollo has a feature that updates records based on changes to a contact’s work history on LinkedIn. So when contacts changed jobs and updated their LinkedIn profiles, Apollo pushed the new data to HubSpot, adding the new companies to those contact records.

However, while Apollo automatically enriched contact records with new data from LinkedIn, it was not able to update the associations for those records.

For example, let’s say John Smith left his job at Nike to work for Puma. After changing his LinkedIn profile, John’s contact record in HubSpot would be updated to show that he now works at Puma. However, the contact record was still associated with Nike, not Puma.

The Damaging Impact of Inaccurate Associations Due to Job Changes

This issue made it difficult for Williams Company to run effective account-based marketing (ABM) campaigns and to accurately report on their data. Here’s why.

When contacts aren’t associated with the right company, they won’t be identified as a stakeholder. That means they won’t be contacted when a relevant deal comes through the pipeline, which impacts the content, communications, and use cases that the company focuses on for that account.

Further, because they are still associated with their old company, they might be included in ABM campaigns that do not apply to them. This is confusing and impacts their perception of your brand, potentially torpedoing the likelihood that they work with your brand again. Inaccurate associations have the potential to negatively impact two separate deals in the pipeline, with the contact’s previous and new company.

When issues like this occur more than once, your team will begin to lose faith in the data stored in your CRM. As a result, they’ll end up spending more time digging for context and looking for missing (or extra) stakeholders when working on deals. Your teams may also start to create duplicate records when they see something is missing, which will introduce a whole new set of problems.

Once a contact moves companies, their email address at their old company is also likely to be shut down, making future emails more likely to bounce. Even if your team is still able to reach the contact at the address in their contact record, the inaccurate association will still cause problems. It is very likely that there will be errors in email personalization or campaign segmentation. The result is a damaged brand reputation with those contacts.

Williams Company encountered all of these issues, which slowed down their sales teams and introduced errors. The company lost key contacts and advocates of their services. In the long term, inaccurate associations due to job changes were detrimental to the company’s ability to nurture and keep relationships with customers.

The Solution: Tag Contacts That Were Updated and Associate Them With Their New Companies

Williams Company was losing relationships with customers after they changed jobs because their HubSpot contact record was still associated with their previous company.

Williams Company was able to address and resolve these issues in three steps:

1. Tag Contacts With New Jobs So They Can Be Re-Associated With Their New Companies

First, Williams Company needed to tag the records that had been enriched with new job data, so that they could associate them with their new companies.

To do this, they created a “job change date” field for contacts in HubSpot. This field captured the date that the targeted fields (job title, company) had been updated for that record in HubSpot. Williams Company then used that field to trigger association templates in Insycle that would remove a contact’s former associated company and replace it with the new employer.

Adding a custom field in HubSpot

Next, Williams Company used HubSpot Workflows to populate the job change date field. When the company name or job title fields changed (become known), the current date and time was placed in the new field. 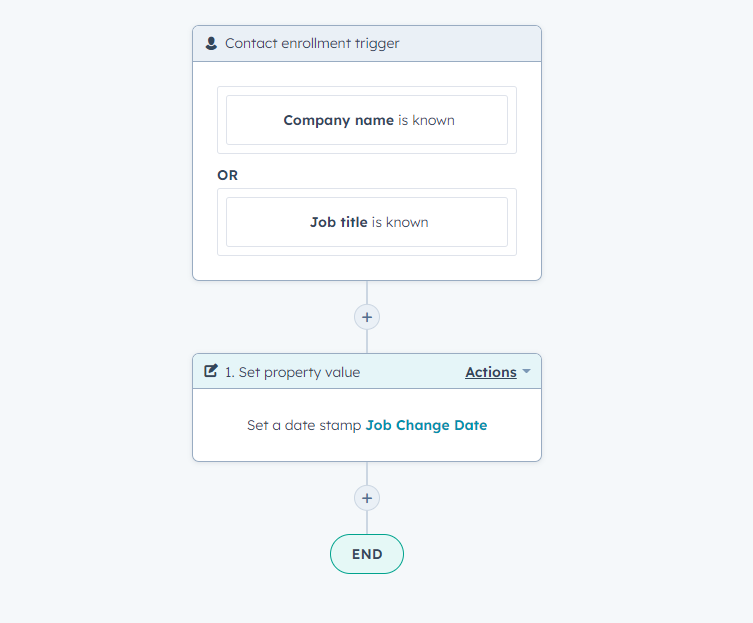 With the updated records tagged, the company could use it to identify records that needed to be checked for re-association.

2. Re-associate the Contacts to Their New Companies

Then, Williams Company used the new field to re-associate their records in the Bulk Operations module. They segmented their database down to records whose job change date field had been updated in the last hour. These were likely to be records that had already been updated by Apollo and now required re-association.

Filtering records down to those that have had their job change date field filled in the last hour.

Then, they built their association template. This template uses Insycle’s “Set” feature, which allows you to replace current associations with new ones in one step. The template targeted both primary and unlabeled associations. It matched associations using the company name field for both contacts and companies based on the enrichment updates from Apollo. 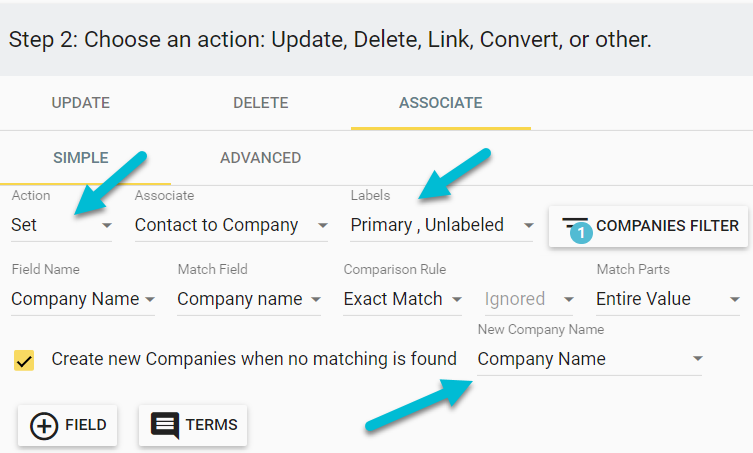 Using the Set feature to re-associate records that match the filter.

Additionally, the template instructed Insycle to create a new company using the contact’s company name field if a corresponding company was not identified in HubSpot. That new company would then also be associated with the contact automatically.

To ensure that the process happened automatically, Williams Company injected an Insycle Recipe, which is a collection of templates, into a HubSpot Workflow.

Then, any time the job change date field was updated, the records would be automatically re-associated to their new companies. 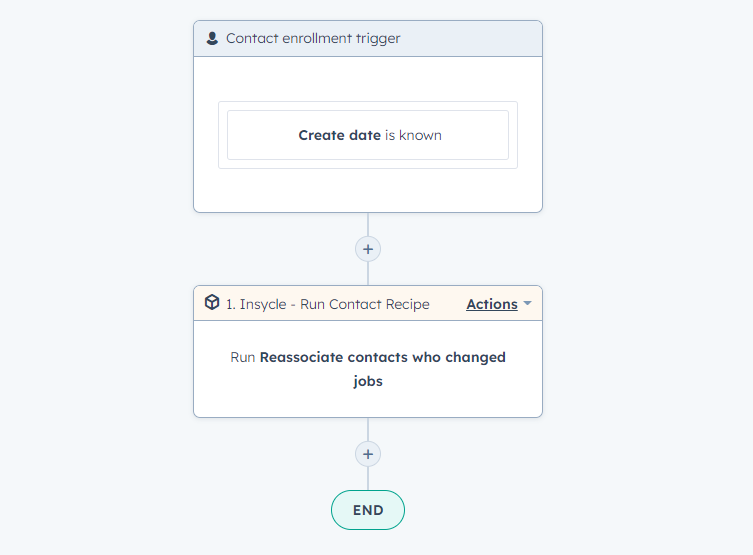 The Result: Williams Company Reliably Maintained Relationships with Contacts after They Changed Companies

With this process, Williams Company was able to reliably maintain relationships with customers after they changed jobs.

Using Insycle, they automatically flagged records that had recently changed jobs and re-associated those contact records with their new companies.

Prior to using this solution, Williams Company routinely lost contact with previous customers that had changed jobs, many of whom could have been champions for their brand with proper communication. Additionally, these association issues caused other mistakes with personalization, segmentation, and deal tracking. This impacted affected customers at every stage of the customer journey.

Thanks to Insycle, Williams company can now preserve these relationships for the long term, creating new deals and strengthening its customer base.