An Insycle customer operated a call center where sales reps and integrated calling systems both created and updated CRM records.

Customers could call at any moment about very recent activity. So this company, whom we will call Ericson, needed data to be reliable for customer-facing sales conversations very quickly after it entered the HubSpot CRM database. Relying on manual deduplication for these deals was too slow.

Ericson was particularly worried about duplicate deals being created in the database. With duplicate data, their reps risked looking at the wrong deal record during a customer call. Then they would miss critical context in those conversations, leading to a worsened experience for customers. Duplicate deals also made deal ownership more complicated, causing sales reps to step on each other’s toes by working the same opportunity under duplicate records.

Ericson used Insycle to ensure that deals were automatically deduplicated immediately after entering HubSpot CRM. As a result, they empowered their sales reps to engage with opportunities confidently.

Here are the steps they took:

They started by asking themselves what it meant for a deal to be a duplicate within their system. What fields would match when a record was a duplicate?

They came up with three fields that would match when a deal was a duplicate:

The deal name and deal source would always match when a deal was a duplicate. Additionally, they had a custom field titled “Phone Number” on the deal object that contained the primary contact’s phone number for the deal. This field would also match in duplicate deals.

This is what the template looked like in Step 1 of the Merge Duplicates module:

Note that all fields used Exact Match comparison modes, not Similar Match. In the phone number field, Ericson also ignored symbols to account for dashes, parentheses, and periods in different phone number formats. This way, they were able to compare just the numerical data.

In their Filter for this operation, they set two additional parameters that a deal must meet to be identified as a duplicate and then merged:

In this way, the company ensured that they were only merging newly created records that were active in their sales pipeline. They also avoided merging historical records by accident.

Step 2: Adding the Deal Duplication Template to a Recipe

Next, Ericson added their template to an Insycle Recipe.

Often, you might use four or five different templates to identify and merge duplicates in different ways. Using Recipes, you can bundle them into a collection and run them together. In this case, Ericson only had one template to add to the Recipe because their duplicate deals were straightforward.

Step 3: Inserting the Deal-Deduping Recipe Into a HubSpot Workflow

Then, Ericson added that Recipe directly to a HubSpot Workflow. There, the duplicate deals would be identified and merged immediately after the record was created. 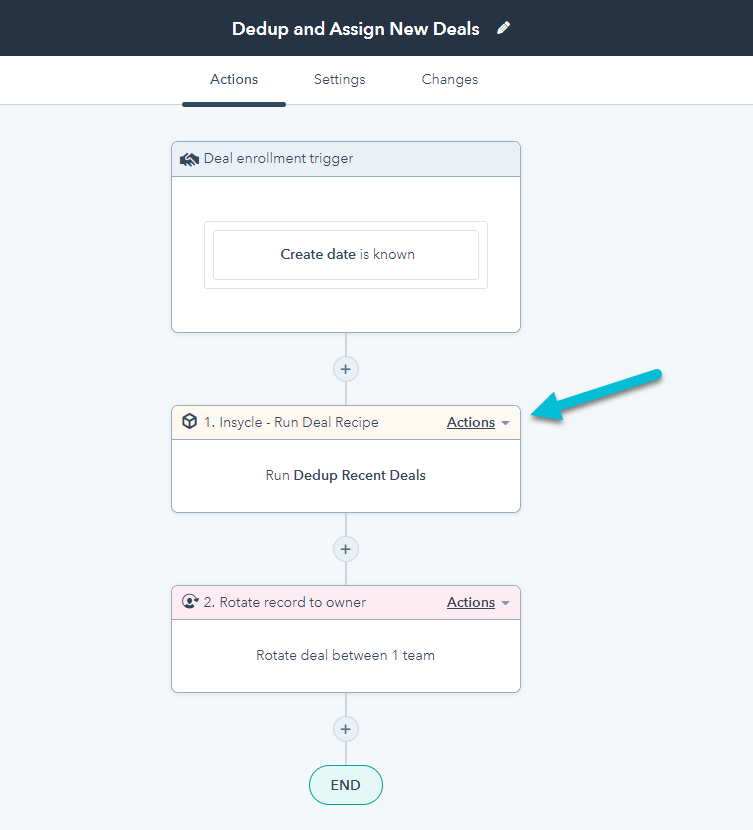 This Workflow runs a new record through the Insycle deduplication Recipe when the create date of a deal becomes known, which happens when the record is created. Here, duplicate deals are identified and merged based on the matching settings in their template from Step 1. Then, the deal is assigned to a new owner in the sales team.

Result: Duplicate Deals Are Merged Immediately After Entering the Database and Before Sales Reps Engage

Using Insycle’s HubSpot Workflow integration, Ericson was able to ensure that duplicate deals would be identified and merged immediately after a deal was created, and before sales reps began to engage with it.

As a result, their sales reps no longer miss context and step on each other’s toes due to duplicate deal records. Now, they can engage with deals in their pipeline confidently.